I have a confession to make. My son (who is four and a half) plays way too many video games. We are a house of gamers. We have a Wii, Playstation 3, PSP and a computer. There are places to play games everywhere – even on the go.

Lately, my son has not been acting very nicely. In particular, he has not been listening and has been talking back. So, we have pretty much banned him from playing video games. And you know what? His attitude is much improved when he doesn’t sit in front of a screen all day. I know, I know. You are all thinking – duh! But, I never would have thought one was related to another. Anyway, I want him to be able to play. I am not of the mindset that he should get no games at all. But he is going to have to earn the video game time.

And wouldn’t you know, just at the right time I came across this post on TeachMama.com. The answer was right there in front of me.

So, I went about creating something functional (and nice looking) for my living room that would allow my son to earn video game time in 15 minute increments.

I had an ugly green frame that was sitting around asking to be used. So I took it outside and gave it a good coat of spray paint. Obviously, this step is optional if you have a non-ugly frame that matches your decor.

Cut foam board to size. I just used the cardboard that came in frame to trace the size onto the foam board. You could also use the glass or measure it out.

Cut and adhere your base layer of paper to top of foam board. I just used a glue stick to tack it down. It is being held in place by the frame, so you probably don’t need anything super strong here. Insert your paper covered foam board into the frame.

Create your envelopes. You could make these yourself if you wanted, but I had some sturdy manila envelopes laying around that I cut to size and covered with matching paper. I really like that I found paper in my stash that has super-hero action words on it. Perfect for my little guy that is totally into super-heroes right now!

Adhere envelopes to your frame. I used Xyron Mounting Tape for this. Another good product to use would be Super Sticky Red Tape, but I was all out!

Label your envelopes. I used my Cricut to cut out the letters, but you could cut them out by hand, draw them on or use letter stickers if you wanted to. (My letters were cut with the ‘Printing 101‘ cartridge.) I added some blue glitter to the letters “play” because you couldn’t really see the blue that well on the patterned paper.

I used the words “play” and “stop” because I know my little guy knows both of these words really well. If he has cards in the “play” envelope he can play for the amount of time he has in there. He can use his video game time he has earned all at once or throughout the day.

Create your “game cards”. I made mine in 15 minute increments. He will have to earn these by listening, helping mommy, being nice to his sister, etc.

Here is a printable version of the game cards I made. They included all our various video game systems so there would be no confusion as to what these cards were for.

Now, I am just hoping we can all stick with it – myself included. 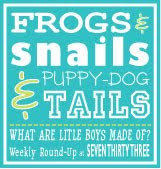 Not Just a Housewife
Tatertots and Jello Weekend Wrap Up Party

Laura Silva is the content creator behind Laura's Crafty Life. This site was created to share a love of crafting and to inspire you to craft a creative and well-lived life! You will find simple craft projects, themed party ideas, organizing tips and tricks, and our adventures in renovating a home.

Laura's Crafty Life was created to share my love of crafting and to inspire you to craft a creative and well-lived life! You will find simple craft projects, themed party ideas, organizing tips and tricks, and our adventures in renovating a home.

Stay up to date

Don't miss all the latest!

Laura's Crafty Life is a participant in the Amazon Services LLC Associates Program, an affiliate advertising program designed to provide a means for sites to earn advertising fees by advertising and linking to amazon.com.

Any or all of my designs are intended for personal use only. You may link to this site and use a single image to link back to any post. All borrowed content must be linked back and properly credited to Laura's Crafty Life. Direct links to any free printables from this site may not be shared. | Republishing content in whole or in part without express written permission is prohibited. | Read full disclosure and privacy policy: Disclosure and Privacy Policy